THE ABCS OF ROUNDS

Today’s post is brought to you by one of our fabulous interns – Ann Zhang.

Fundraising. An often-necessary, and almost always time-consuming and confusing exercise for start-ups. At each round, there are also typically new investors, metrics, valuation, and objectives to consider.

Even the delineation between rounds can be confusing – different industries, investors, and times in history may have varying ideas of what a seed round is (or any other round!), including the total amount and level of dilution. Yet while not all industries and companies follow the same path for financing (some engage in IP or debt financing), most new VC-backed businesses do tend to follow a more defined route: 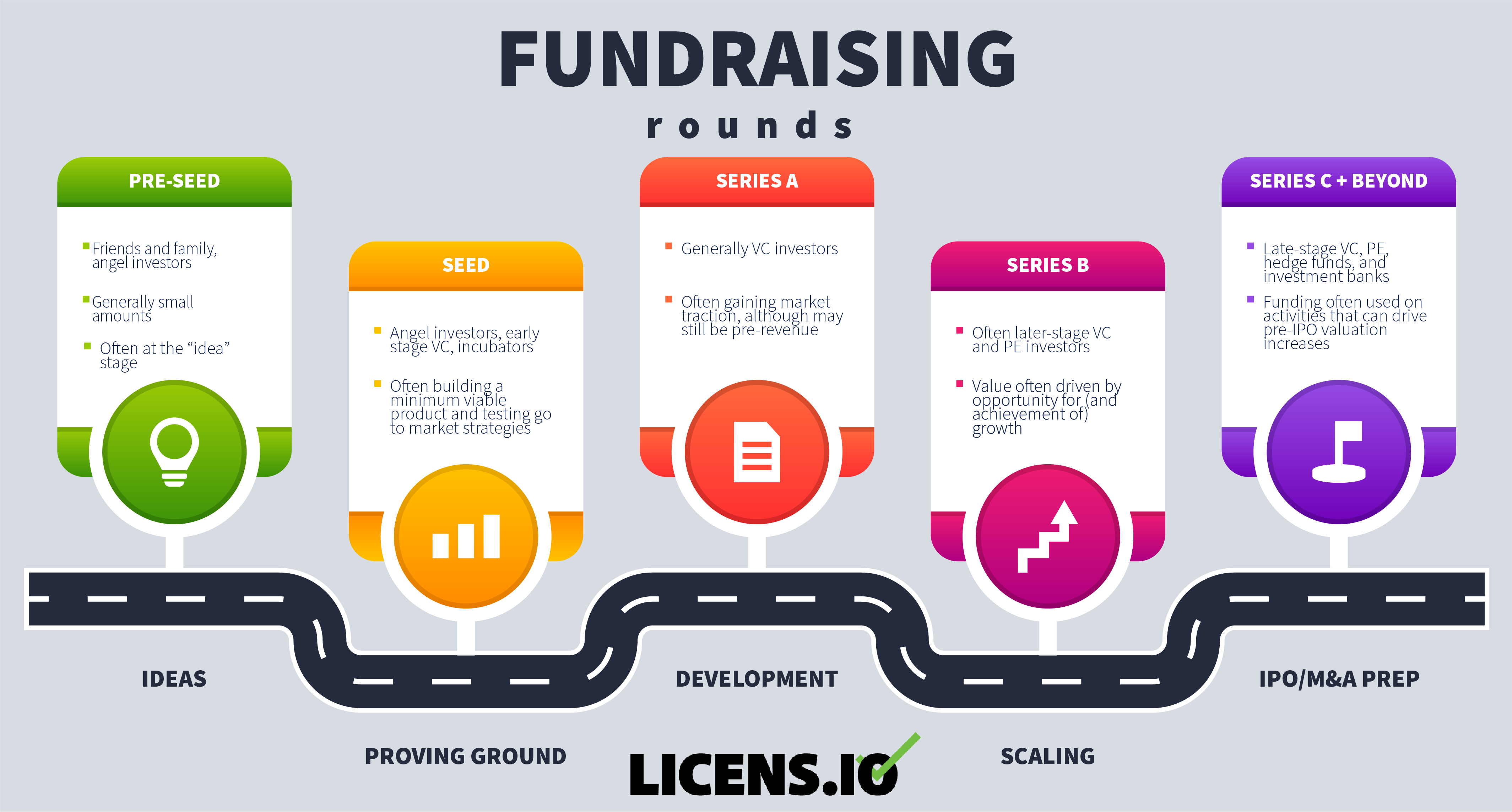 At the company’s creation, funds to get started are likely to be procured from family and friends, personal savings (“bootstrapping”), angel investors, or incubators. These funds make up the initial investment needed to get the company started.

Pre-seed and seed stage companies are often at the “ideation” stage, where their focus is on identifying and refining ideas for products or services. Investors often focus on the strength of the company’s team and the potential of the idea. Incubators are a popular option at this stage, as they provide founders with valuable processes and experience navigating this ideation phase, as well as funding and operational support like office space or access to technical resources.

Angel investors also invest in nascent companies, usually when a founder or company demonstrates that they have potential to create value. Angel investors typically invest in areas in which they are personally interested or experienced.

With the money gathered from pre-seed and seed funding, a product/service will be developed with sales starting to be generated. Companies may begin to have one-time or recurring revenue, but in recent years this has been more “icing on the cake” than the actual cake. Companies might find themselves in need of more funds to execute upon plans to establish market traction or to increase their visibility and reach, often leading to a Series A funding round.

During this stage, the performance of a company will be key in an investor’s decision. Numbers that can demonstrate a market’s receptiveness and the consistency go far to demonstrate potential in a company. The past decade’s VC boom led to Series A funding for many pre-revenue companies; while they did not have revenue upon which to measure performance, investors would take into account other factors, such as the number of daily active users (DAU), the cost to acquire customers (CAC), and an assessment of product/market fit (PMF). Given the shift in the markets in the first half of 2022, it’s likely that we’ll see a shift in expectations, with investors demanding higher performance indicators and metrics; the days of pre-revenue Series A raises may be a thing of the past (until the next boom!).

Generally companies will seek funding to further scale and develop their business, usually with a focus on building out their team, increasing marketing, and speeding up product development. Series A raises vary widely, from a couple million dollars to upwards of $15 million; for 2022 the median is around $8 million.

The goal of a Series B round is to raise funds to accelerate a company’s progress: faster development of the product, more business development and marketing, and scaling to meet expected demand.

By the time a company is looking to raise a Series B round, they should have developed a clear go-to-market strategy and achieved strong traction. Many of the early stage risks have been mitigated or managed by this point, and the focus is now on growth.

In 2021, the median Series B raise was $31 million, up a whopping 55% from 2020! Investments at this stage often come from venture capital and private equity firms.

The focus of a Series C raise is generally on preparing the company for an initial public offering (IPO) or M&A activity (either as the target or the acquirer). Investors in Series C rounds include late-stage venture capital firms, private equity firms, hedge funds, and investment banks.

Companies at this stage of funding have been successful in establishing market share and are looking for new opportunities for growth. While many companies seek to go public after a Series C raise, others continue fundraising through further rounds (some going as far as a Series J raise!).

There are significant costs associated with going public; in addition to spending funds on growth-oriented activities, companies must invest in governance, regulatory, and compliance (GRC) capabilities and systems that were not previously required.

It’s trite, but true: most startups fail. The number one reason is because they run out of money and are unable to secure additional funding. Given how much time and energy founders pour into their business, it’s essential for them to keep long-term growth in mind and recognize that they might need to raise additional funds down the line to further accelerate business growth.

Circumstances in each industry and field affects the growth trajectory and development stages of a company. For example, some companies might offer a more self-sustained growth after they begin generating revenue, while others might require additional outside capital until a certain scale is reached. Based on their particular situation, business owners should plan in advance for growth and potential resources needed – both internally and externally – to execute upon the plan. For external resources, such as additional funding, putting in place a strategy on how to acquire them is important. Decisions early on for a company can determine the ease in acquiring those outside resources. If later outside funding is a keystone in a company’s growth strategy, giving up too much equity early on can lead to difficulties in closing this late-stage funding. Planning for the possibility of future rounds is an important consideration when making early equity determinations.

The fundraising process is demanding. Our team can help you put your best foot forward by performing a technology assessment to highlight valuable tech assets, provide strategic guidance to facilitate growth, and prepare valuations to help you understand what’s important to your investors.